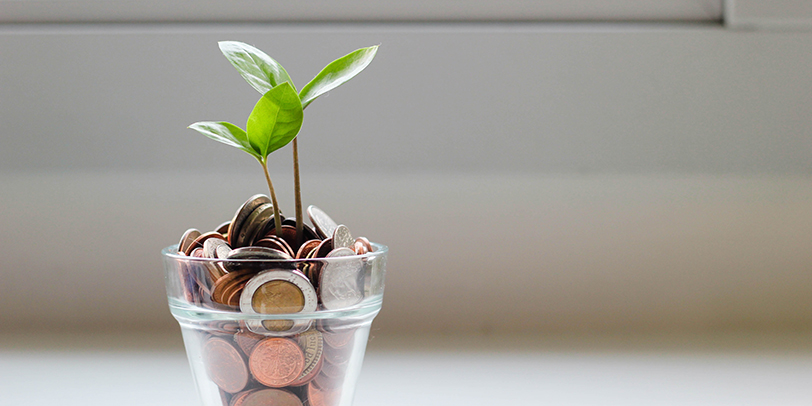 In the industry, we sometimes come across words and expressions that cause some confusion. In this small article, one of such will be discussed. Having proven its potential and importance to many, we will discuss VSD’s or is it VFD’s? VVVF’s? frequency inverters? just inverters? Confused? We, at TecnoVeritas Energy Department, will try to help shed some light on what this technology is, how it works and its uses.

It is very common to see that in the industry, due to their reliability as well as their longevity, pumps and fans, usually necessary for a variety processes, are seen as static elements of the process, which are frequently neglected. Pumps, being an integral part of countless processes, particularly in cases where it is necessary to move fluids over long distances or to higher heights, are responsible for the consumption of about 20% of the energy consumed in onshore industry units, reaching up to 50% of the total energy consumption on ships. [1] Thus, the impact that an improvement in pump efficiency can have on the total efficiency of the exploration units and on the naval sector is notable, directly translating into monetary gains and associated reductions in greenhouse gas emissions and other pollutants. It also has a particularly positive impact due to the indirect reduction of pollutants such as nitrogen oxides, sulphur oxides, CO2, and particles.

The work that the pumps have to perform depends directly on variations in the magnitude of the process’s “output” or, in other words, variations in load. However, these adjustments are usually made through an adjustment with valves or other means of obstructing the flow, which end up translating into a loss of process efficiency, both in energy and money, since the pumps continue to work at the same load and energy losses are introduced with the induction of turbulent flow and decreased kinetic energy of the fluids. To solve this problem, we bring to the discussion the VSD (“Variable Speed Drive”).

Pumps are characterized by a known behaviour, following the Laws of Affinity. These laws, Equations 1, 2 and 3, show that if, for example, the rotor speed (N) is halved, the flow rate (Q) is also halved, the head (H) is ¼ of the initial one and the power (P) and energy consumption only 12.5%! This variation in power and energy consumption with the variation in speed and flow can be better understood in Figure 2,  where on easily observes the savings potential associated with the use of speed variation drives, particularly in processes in which the required load fluctuates more significantly. 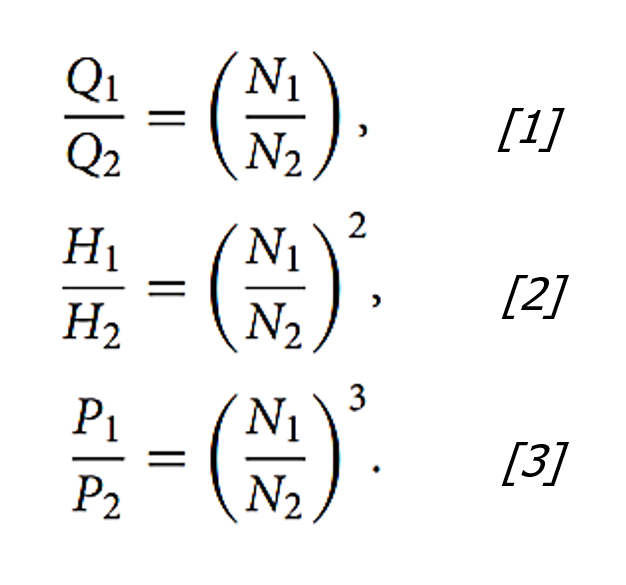 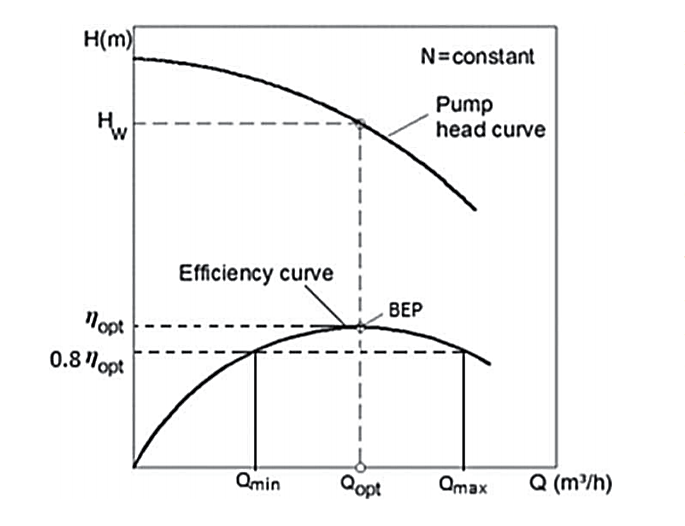 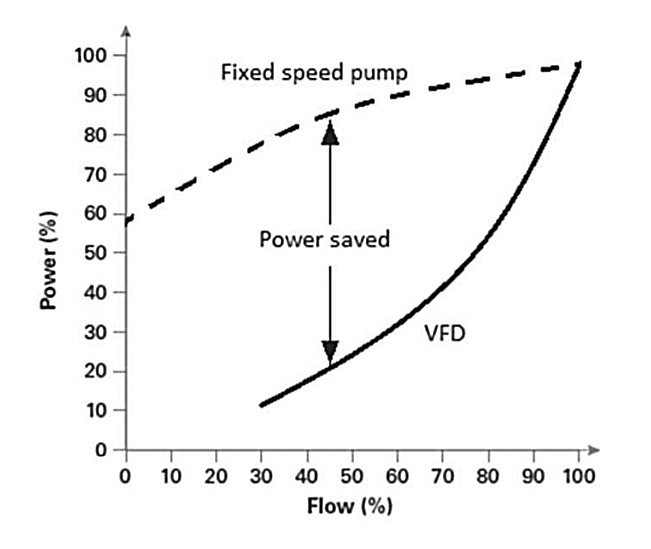 VFDs, which can also be called VVVF (Variable Voltage Variable Frequency), control the rotation speed of the pump motor’s rotor by varying the supply frequency (although they also adjust the voltage). This technology can be divided into 3 main parts: the converter, the DC bus (direct current) and the inverter. In the first part, the converter transforms the signal from AC (alternating current) to DC, passing through the DC bus until it reaches the inverter, where PWM (pulse width modulation) is used. It is in this last part, through the control of the temporal spacing between the pulses, or of their magnitude, that it is possible to “trick” the motor in order to “think” that what it receives is an alternating current wave whose frequency can be controlled (see Figure 3).

In addition to translating into direct monetary savings due to the energy savings that occur when using these systems, the application of variable speed drives also leads to long-term savings due to the reduction of mechanical stress and, consequently, of the system’s maintenance needs. Since the application of this technology is quite practical, a small gesture like its implementation brings great benefits at an economic, energy and environmental level.